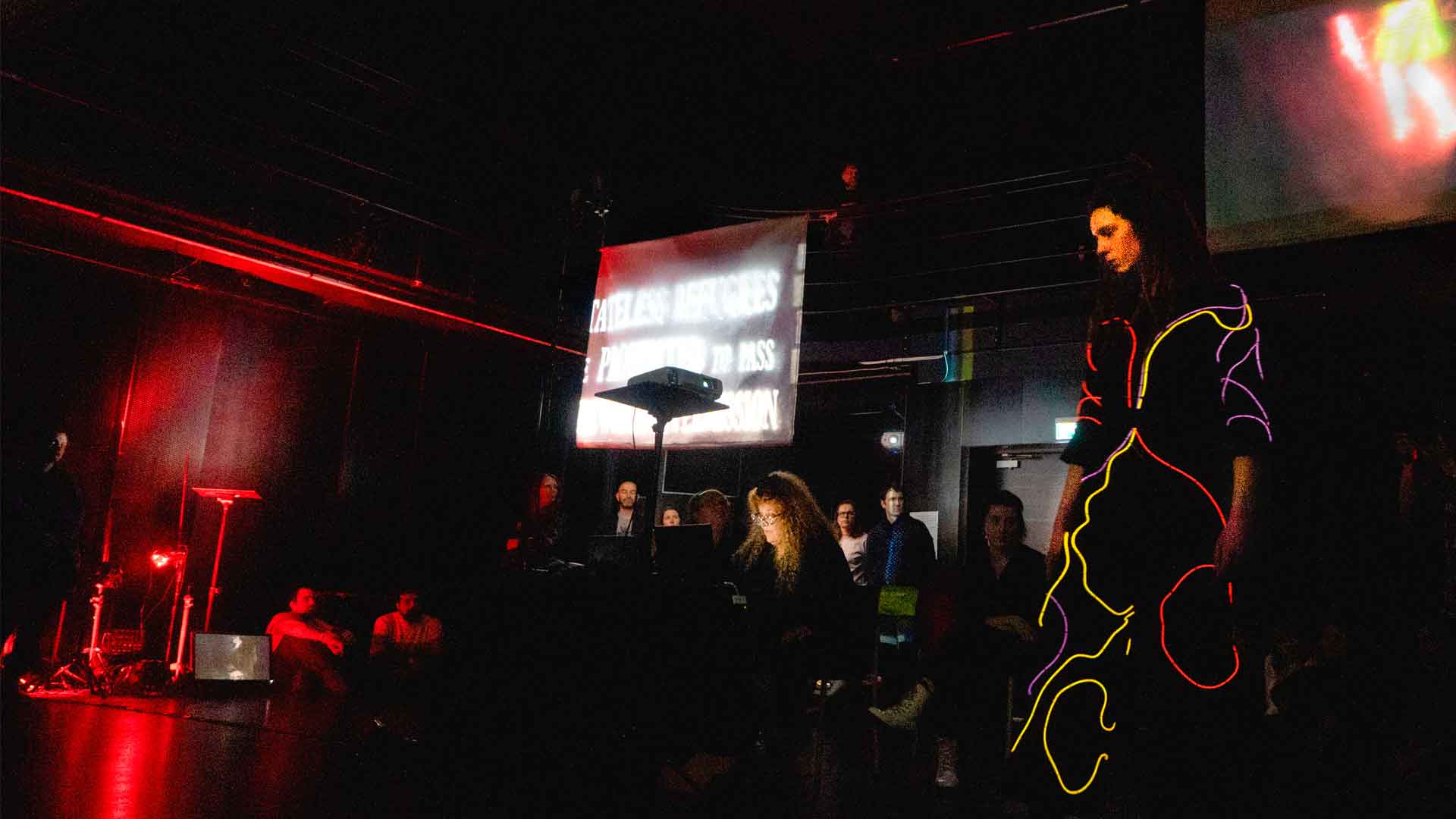 Eva recites a spoken word libretto about their love affair. Her brainwaves trigger databanks of videos and audios of emotionally themed memories. Her libretto is uploaded to the cloud and processed by the custom-built ‘sicko’ AIBO, who responds to her entreaties. AIBO’s responses are analyzed by a separate AI for their emotional meaning, and this meaning launches different colored background lights, as well as ‘imperfect’ videos, as AIBO tries to imitate Eva’s previous visual memories, but cannot.

Eva continually interacts with the audience setting up a live time feedback loop between her speech, feelings, the viewers, the colors displayed on her body, and the visual and sonic environments. Audience members experience the story while witnessing the interiority of both AIBO and Eva.

The performance raises issues about a time when humans and machines potentially merge consciousness and explores if AI can create memory through databanks that emulate human emotion. It also asks two rhetorical questions; can an AI be fascist, and can an AI have epigenetic, or inherited traumatic memory. It raises but does not answer looming issues about a potential future where humans and machines merge consciousness.

Ellen Pearlman is a new media artist, curator, critic and educator. She received her PhD from the School of Creative Media, Hong Kong City University where her doctoral thesis and performance “Noor- A Brainwave Opera – Is There A Place In Human Consciousness Where Surveillance Cannot Go?” premiered at ISEA Hong Kong. It was awarded the highest global honors from Leonardo Labs Abstracts. She is a Research Fellow at MIT, a Vertigo STARTS Laureate, a Fulbright World Learning Specialist, a Zero1 American Arts Incubator/U.S. State Department Artist, as well as a Senior Research Assistant Professor at RISEBA University in Riga, Latvia. Ellen is also the Founder and Director of ThoughtWorks Arts, a global technology research lab based in New York, President of Art-A-Hack (TM), and Director and Curator of the Volumetric Society. She has presented at festivals, conferences and seminars around the world.

Any cookies that may not be particularly necessary for the website to function and is used specifically to collect user personal data via analytics, ads, other embedded contents are termed as non-necessary cookies. It is mandatory to procure user consent prior to running these cookies on your website.