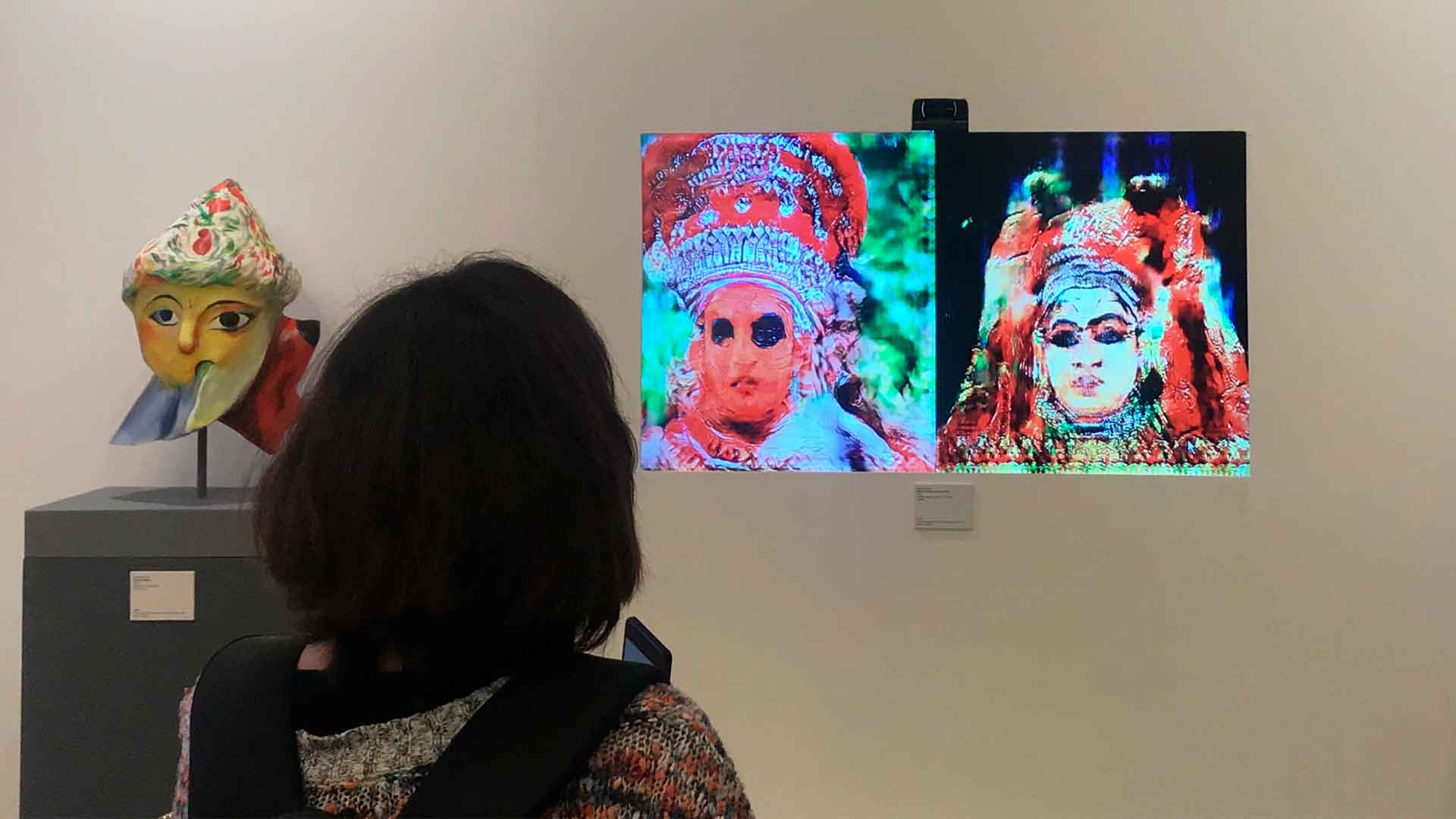 With Masked Reality, Harshit Agrawal uses artificial intelligence (AI) to explore the subject of faces, traditions and identity, especially its malleability in the age of technology in the form of live interactive work, static portrait like paintings or as sculptural objects, drawing inspiration from traditional mask cultures of different regions of India.

Throughout our years of existence as a culture, we’ve crafted and performed several kinds of rituals and ceremonies, both collective and individualistic as acts of transformation and transcendence. Masks and face transformative decorations have been fundamental across the Indian culture in our journeys into unknown realms, in our celebrations of the malleability of human representation, or as a tool for practical disguise and entertainment. It helps us engage with our world from a completely new vantage point, augmenting our sense of self, very similar to what technology, especially AI enables today. What happens when these media of transcendence collide? Can we teach machines about our cultural heritage, and make them an instrument for our own exploration and engagement with our heritage, resulting in active engagement rather than passive consumption.

In the interactive piece, an audience’s face is transformed in real-time into faces of Kathakali, a female form and Theyyam, a male form (both dances of Southern India), highlighting the fluidity of identity as every individual sees themselves in the light of a female and male form.

The 2D paintings are generated using A.I generative techniques. The machine is trained on a curated selection of masks from central India.

The sculptural objects have been created using these 2D outputs, which are then modelled into a 3D form, 3D printed and painted over, referencing the original AI generated image.

Harshit is an artificial intelligence (AI) and new media artist. Through his practice, he explores what he calls the ‘human-machine creativity continuum’- the melding of human and machine creative agency. He uses machines and algorithms and often creates them as an essential part of his art process, embracing becoming the cyborg artist. He often juxtaposes traditional art media and tools along with machines and computation, creating a space to both direct, and be guided by the machine.

Harshit was the only Indian artist among 7 international AI art pioneers in one of the world’s first A.I art shows in a contemporary art gallery (Gradient Descent at Nature Morte). His work is part of the permanent exhibition at the largest computer science museum in the world, HNF museum in Germany. He has exhibited work as solo and group exhibitions at other premier museums, galleries and art festivals around the world, like the Ars Electronica Festival (Austria), CADAF Contemporary and Digital Art Fair, HI-RESOLUTION Exhibition for New Year’s Ball Drop at Times Square (USA), Tate Modern (UK), Asia Culture Center (Korea), QUT Art Museum (Australia), Museum of Tomorrow (Brazil), AI Everything Art Show (Dubai), School for Poetic Computation- Alt-Ai (NYC), Art Center Nabi (Korea), Laval Virtual (France), ISEA (Canada). He work is featured at Superrare too – a premium Blockchain platform for-art (NFT) platform. His work has also been extensively covered in international media, including BBC, New York Times, Stir World and others, often as one of the founding artists of the AI art movement.

Along with this, he carries out academic research too, having published several research papers on creation tools at art and human computer interaction conferences. He is a graduate of the MIT Media Lab and IIT Guwahati and has carried out art residencies at Museum of Tomorrow (Brazil), Art Center Nabi (Korea) and X-Lab (Japan).