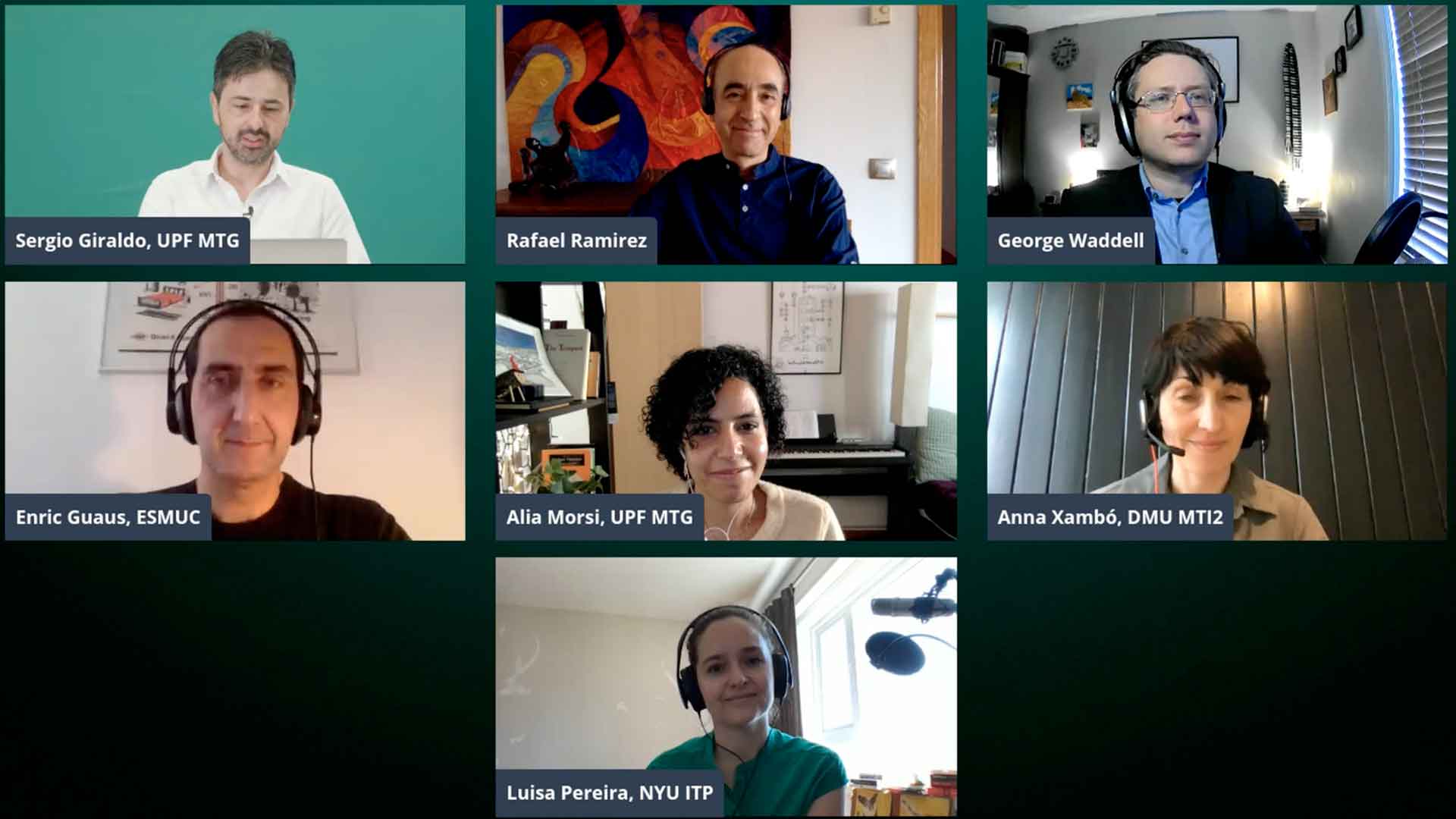 The third event explores on Musical Performance and Education with AI, and it will debate around these questions: What is musical performance and how is it related to creativity? What are the challenges for fostering creativity in musical education? Can AI help students improve interpretation and creativity? How AI technology can promote inclusion in musical studies? Should we need to improve the incorporation of women in this artistic discipline?

Debate on the artificial intelligence technologies used in musical performance and education.

Sergio Giraldo, is a post-doc researcher at the Music and Machine Learning Lab of the Music Technology Group (MTG) and professor at the Department of Communication Technology at the Pompeu Fabra University. He obtained his bachelor degree in Mechanical Engineering at Los Andes University in Colombia in 1998. In 2006 he obtained a degree in Jazz and Modern Music in the Conservatorio del Liceo from Barcelona. In 2011 obtained the MS degree in Sound and Music Computing, and later in 2016 obtained the PhD in computer science, both at the Pompeu Fabra University in Barcelona, Spain. His main research activity has been done since 2011 within the areas of Machine learning, Expressive Music Performance Modeling, Emotion detection with brain computer interfaces, Automatic Music Transcription, and Music Learning and Teaching Technologies. Both master thesis (2011-2012), and PhD thesis (2012-2016) were carried out under the supervision of Dr. Rafael Ramirez, leader of the MML lab, at the Pompeu Fabra University. During this period, he has participated at three investigation projects, lead by Dr. Ramirez. His main role at the projects have been to investigate and develop computational tools within the aforementioned research areas. The outcome of these research has been presented and published at International Conferences and peer reviewed Journals.

Rafael Ramírez is a Professor and Leader of the Music and Machine Learning Lab at the Department of Information and Communication Technologies, Universitat Pompeu Fabra, Barcelona. BSc in Mathematics form the National Autonomous University of Mexico, and MSc in Artificial Intelligence and PhD in Computer Science from the University of Bristol, UK. Classical Violin and Guitar studies at the National School of Music in Mexico, and performed extensively in Europe, America and Asia. For five years, Lecturer in the School of Computing of the National University of Singapore. His research interests include artificial intelligence, music technology, technology-enhanced music learning, neuroscience and their application to health and well-being. He has conducted research on the impact of music in autism, emotional disorders, palliative care, cerebral palsy, and stroke rehabilitation.

He has published more than 150 research articles in peer-reviewed international Journals and Conferences, and regularly acts as guest-editor for several special issues focused on music and artificial intelligence.

George Waddell is a Research Associate in Performance Science at the Royal College of Music. He is also a Sessional Lecturer and honorary Research Associate in the Faculty of Medicine at Imperial College London. His research focusses on the evaluation of performance, including decision-making among judges and audiences and the development of evaluative skills, as well as how technology can be used to enhance how performance is assessed and learned. He holds a PhD in Performance Science and completed his BMus and MMus in piano performance while studying psychology. He is a Consulting Editor for the journal Musicae Scientiae, an Associate Editor for Frontiers in Performance Science, and a co-author of the research methods textbook Performing Music Research.

Anna Xambó is a Senior Lecturer in Music and Audio Technology at De Montfort University (Leicester, UK) and a member of the Music, Technology and Innovation – Institute of Sonic Creativity (MTI²). Her research and practice focus on sound and music computing systems looking at novel approaches to collaborative, participatory, and live coding experiences. Her solo and group performances have been presented internationally in Denmark, Germany, Norway, Spain, Sweden, UK and USA. She is PI of the EPSRC HDI Network Plus funded project “MIRLCAuto: A Virtual Agent for Music Information Retrieval in Live Coding” and has taken leading roles in organisations with a special interest in improving the representation of women in music technology: Women in Music Tech (2016-2017, Georgia Tech); WoNoMute (2018-2019, NTNU/UiO); and WiNIME (2019-present, NIME).

Luisa Pereira is a computational artist and musician based in Brooklyn, NY. Her interactive music pieces have been exhibited internationally, at venues like the Museum of Contemporary Art in Santiago de Chile, the New Museum’s art and technology incubator in New York City, the Loop Summit in Berlin, and the FILE electronic arts festival in São Paulo. Pereira’s professional work includes the creation of interactive and generative music installations for a range of clients, in collaboration with musicians like Björk, St. Vincent and Little Dragon.

Pereira is Assistant Arts Professor of Interactive Telecommunications at New York University’s Tisch School of the Arts. She has developed creative coding curricula for the NYC Department of Education and the Processing Foundation, and taught in Shanghai, Berlin, and Montevideo.

He is a associate professor of the Sonology Department at the ESMUC. Enric is also assistant professor at the Universitat Pompeu Fabra (UPF), Universitat Oberta de Catalunya (UOC) and the Escola de Noves Tecnologies Interactives (ENTI). He obtained a PhD in Computer Science and Digital Communications in 2009 at UPF with a dissertation on automatic music genre classification. His current research is divided between music information retrieval and human auditory perception. His previous studies are in between the electronics engineering and music (piano in both classic and jazz traditions).

His artistic work is focused on field recordings, sound installations and what he calls “subtile augmentation of acoustic instruments”.

Associate professor of the Sonology Department at the ESMUC.

Alia Ahmed Morsi is a first year PhD. student at Universitat Pompeu Fabra’s Music Technology Group (MTG). Her current interests are technologies for music learning, which can include a range of research topics such as: characterizing the difficulty of music scores, performance assessment, and adaptive learning for musical content. She holds a Master in Sound and Music Computing from UPF, and a Bachelor’s degree in Computer Science from the American University in Cairo.